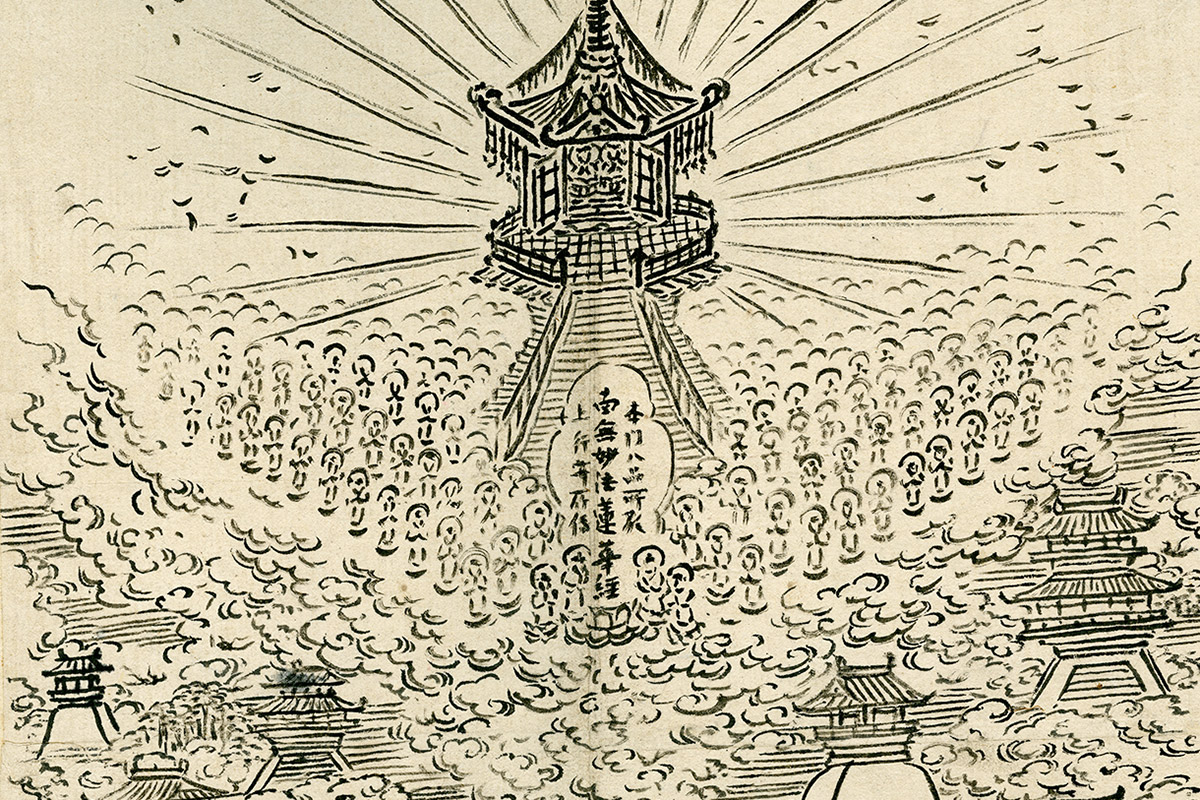 When Shakyamuni Buddha preached the Honmon 本門 (teachings from chapter 15 through 22 of the Lotus Sutra), in chapter 16 The Life Span of Buddha 如来寿量品第十六, he said for the first time: “I can imagine people must believe that I am Buddha who gave up his prince status, became a priest at nineteen and attained enlightenment at thirty. However, my true form is Primordial Eternal Buddha, who was already enlightened in the distant past.” [All quotes translated from Japanese.]

Then he said: “I am always teaching and guiding all sentient beings not only in the Saha World 娑婆世界 (Buddhist term for the Earth) but also in every other world in this universe. But I don’t appear as this Primordial Buddha when I save each world. I save people by disguising myself as different figures that are relevant in each world.”

This means that the chapter 16 The Life Span of Buddha 如来寿量品第十六 reveals that Primordial Buddha always teaches and guides us—in the past, present and future—with his immeasurably great mercy, not only in the Saha World but also in all other worlds.

Therefore, Shakyamuni Buddha, who historically lived in India, is another form of Primordial Buddha. According to His own story, there are numerous Buddhas in all the worlds throughout the universe in the past, present, and future. We often hear different names of Buddhas such as Shakyamuni Buddha 釈迦牟尼仏, Amitabha Buddha 阿弥陀仏, Great Sun Buddha 大日如来 or Medicine Master Buddha 薬師如来. People usually think that they are all Buddhas who can save us and answer our prayers, even though they have different names. However, they actually carry out different missions for different people in different worlds. That is why it is generally said that Amitabha Buddha is the master of the Western Pure Land and Medicine Master Buddha is the master of the Eastern Pure Emerald World. The true form of all Buddhas is Primordial Buddha and Shakyamuni Buddha is his manifestation to save all sentient beings in the Saha World by spreading his teachings and showing how to practice them.

Primordial Buddha—the sole and most exalted Buddha—finally revealed his true shape when preaching Honmon. Although the whole Honmon is the most important teaching in the Lotus Sutra, especially the eight chapters from chapter 15, Emerging from the Earth 従地涌出品第十五 through chapter 22, Entrustment 嘱累品第二十二 are crucial for us—people living in the present days called “Latter Day of the Law.” These eight chapters are called Honmon Happon 本門八品 teachings. Happon literally means the eight chapters in Japanese. Let’s see what is preached in Honmon Happon in the next article.